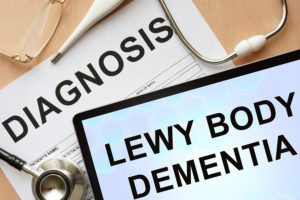 Elder Care in Westfield NJ: What is Lewy Body Dementia?

If you have an aging loved one, you are undoubtedly familiar with the threat of dementia in seniors. Perhaps you or your elder care aide have actually noticed signs of dementia in your loved one already.

What you may not know, though, is that there are many different types of dementia. While Alzheimer’s is the leading cause of dementia (which, in this case, refers to changes in personality and problems with memory and mental function), Lewy body dementia is a close second.

What exactly is Lewy body, dementia, though? To answer this question, you have to start with another:

What are Lewy bodies?
Lewy bodies are protein deposits that form in nerve cells. These deposits cause problems in the sections of the brain that are responsible for the things we do every day, like thinking, memory, and movement of our body parts. The impairment of the brain in these sectors causes dementia.

What puts one at risk for Lewy body dementia?
Honestly, there is no solid evidence to explain what exactly causes Lewy body dementia, apart from the Lewy bodies, so it cannot be prevented. However, this condition is more prevalent in men and in people over 60. It also appears to have a genetic component, as one is more likely to experience Lewy body dementia if a relative had it before them.

The one risk factor that could possibly be controlled in this case is mental health. Recent studies have shown a link between Lewy body dementia and depression. While this is still being studied, helping to prevent and treat depression in your loved one could possibly be a way to lower their odds of having this illness.

What are the symptoms of Lewy body dementia?
Symptoms of Lewy body dementia include depression, hallucinations, staring off into space for long periods of time, sleep problems, and a general apathy about one’s surroundings. The inability to regulate normal body functions like temperature control (sweating), pulse, and digestion are also common signs, as are Parkinson’s-like symptoms, such as rigidity in the muscles, tremors and difficulty speaking.

What happens as Lewy body dementia progresses?
Lewy body dementia is a progressive disease, meaning that it gets worse over time. As this occurs, the person experiencing the dementia can become very aggressive and/or depressed. They are also at a higher risk for falling, as they have less control over their muscles and limbs, and the Parkinson’s-like symptoms such as tremors worsen over time. According to the Mayo Clinic, the average life expectancy of someone with Lewy body dementia is eight years after the diagnosis.

If you or your elder care provider suspect that your loved one could be suffering from Lewy body dementia, schedule an appointment with your doctor, so that you can get them treatment as soon as possible.

If you or an aging loved one are considering hiring elder care in Westfield, NJ, call the caring staff at Helping Hands Home Care today at 908-418-4299. Providing Home Care Services in all of Northern and Central NJ, including Clark, Westfield, Cranford, Scotch Plains, Rahway, Linden, Summit, Edison, Elizabeth, Mountainside and the surrounding areas.